Transindex also wants to play an active role in shaping the cultural life of Cluj. We want to contribute a little to what the public can get to know from the cultural production, from fresh literature. Because of the epidemic period, important authors and books that have not yet reached Cluj must come home. This will happen on 16 and 17 July: Balla Zsófia, Selyem Zsuzsa, Szabó T. Anna, Tamás Gáspár Miklós and Tompa Andrea will be here in Cluj.

Where can you meet them?
We’ve found a good place: the breezes from the river in the courtyard of the Tranzit House can make summer evenings and the conversations pleasant. So, leaning on the grass, sitting on a chair, standing, sitting here, you will definitely enjoy the Transindex book evenings. If you are at home, don’t miss it!

Which volumes will be on show?

Balla Zsófia is coming with two volumes: a collection of essays and a cross-section of her poetry in one book (The Two Halves of Life and The Wasp’s Nest). (Friday, 16 July - 18h)

The title of Tompa Andrea’s novel is no excuse: what is home, where are we at home, how far does Home extend? (Friday, 16 July - 19h)

Szabó T. Anna is coming home. The short stories in her book of Escape Exercises are condensed modern ballads, and it turns out that our polished modern life works on the same springs: love, commitment, life, death. (Friday 16 July - 20h)

Selyem Zsuzsa is at home, but the world she speaks of is home for everyone. We have to face what we do with it: the first end of the world we spent together. (Saturday, 17 July - 6pm)

Tamás Gáspár Miklós’s Antithesis is like the author: he constantly questions, confronts us with the facts, relentlessly communicates reality to us and cannot be escaped without thinking. (Saturday, 17 July - 19:00)

The authors’ interlocutors are mostly Transindex journalists or figures we are proud to count among the intellectuals of the newspaper’s circle of friends. Balla Zsófia will be interviewed by Markó Béla, the opening event of the two-day event, followed by Tompa Andrea and Szabó T. Anna. Emese Vig will be in conversation with the author of the Cluj-Napoca novels, followed by Szabó T. Anna answering questions from Albert Antal Orsolya and Visky András. On Saturday, Selyem Zsuzsa’s dialogue with Kulcsár Árpád will be followed by the book launch of Tamás Gáspár Miklós, where the author will be interviewed by Gyöngyösi Csilla and Horváth-Kovács Szilárd.

You can not only enjoy the talk, but also buy the authors’ books and have a chat with them over a refreshing drink. The quality and the atmosphere are guaranteed to be Transindex and Tranzit House-like!
Our supporting partner is Babeș-Bolyai University, thank you for your help!

The programme in brief: 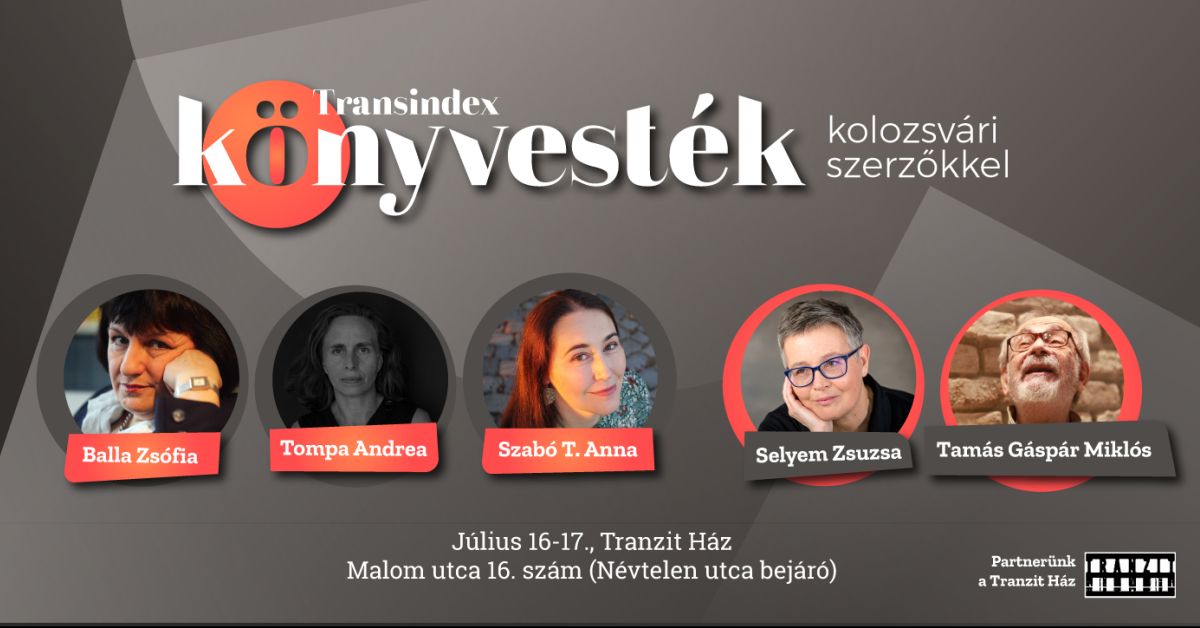