Casa Tranzit and the Colectiv A Association invite you to the launch of the book Creativity-Commodity. An insider`s perspective of Cluj’s independent cultural scene 2009-2019, written by Miki Braniște (curator and cultural manager). The launch will be followed by a debate on the themes addressed in the book. The dialogue to which we invite you is part of the series of discussions initiated by the Independent Group for Culture / Független Intézmények Kulturális Szövetsége (GICu/FIKuSz).
As the result of the doctoral studies of the author, the book analyses how European cultural policies, inspired by the creativity paradigm, are put into practice in Cluj. The creativity paradigm, fostered by the phenomenon of globalisation, is based on the existence of a social class, a type of urban development that gives rise to the creative city and a creative industry that provides the current profile of the economy. The connection between cultural policies and the creative economy makes the economic value of culture and creativity outweigh their symbolic and social value. Due to the connection of creative industries to economic markets, the latter influence the stakes and ethos of the cultural sector, which has been renamed the cultural and creative sector. Is this proximity to the engine of change in the global economy a threat or an advantage for culture and creativity? Who are the winners of this alliance between industry and culture, economy and creativity? What kind of hybridisation will result from the coming together of the two fields? How can the field retain its essence as a producer of public culture for wider communities, a source of developing critical consciousness, a way of knowing the world and being with others? The case study of the Paintbrush Factory project in Cluj serves as an example to better understand the effects of the paradigm shift that overlapped with the city’s transition from a post-industrial identity to one of a creative and more recently innovative city. The research exposes how the independent cultural scene in Cluj relates to these changes that are already having effects through the phenomenon of gentrification due to urban regeneration policies, through the phenomenon of festivalization, the commercialization of culture and the neutralization of critical artistic discourse.

Biography
Miki Braniște is assistant professor at the Faculty of Theatre and Film of the “Babeș-Bolyai” University with a PhD thesis in the field of cultural management and policies. She is a cultural manager and curator for performing arts and interdisciplinary projects, president of the Colectiv A Association and former director of the TEMPS D’IMAGES Festival in Cluj for 10 editions. Between 2009 and 2019 she was a member of the Board of Directors of the cultural space Paintbrush Factory, actively participating in its development strategy. In 2015 she received the title of Knight of Arts and Letters from the French Ministry of Culture. In 2016 she received the Prize for interdisciplinary projects from the Administration of the National Cultural Fund and the Prize for supporting contemporary dance from the National Dance Centre of Bucharest. Since 2017, at the invitation of the Goethe Institut Bucharest, he has been curator of the Cultural Management Academy program in Romania till 2020.

The book can be found in bookshops and on the website of Idea and Presa Universitară Clujeană:
https://www.idea.ro/editura/ro/creativitatea-marf-d206.html 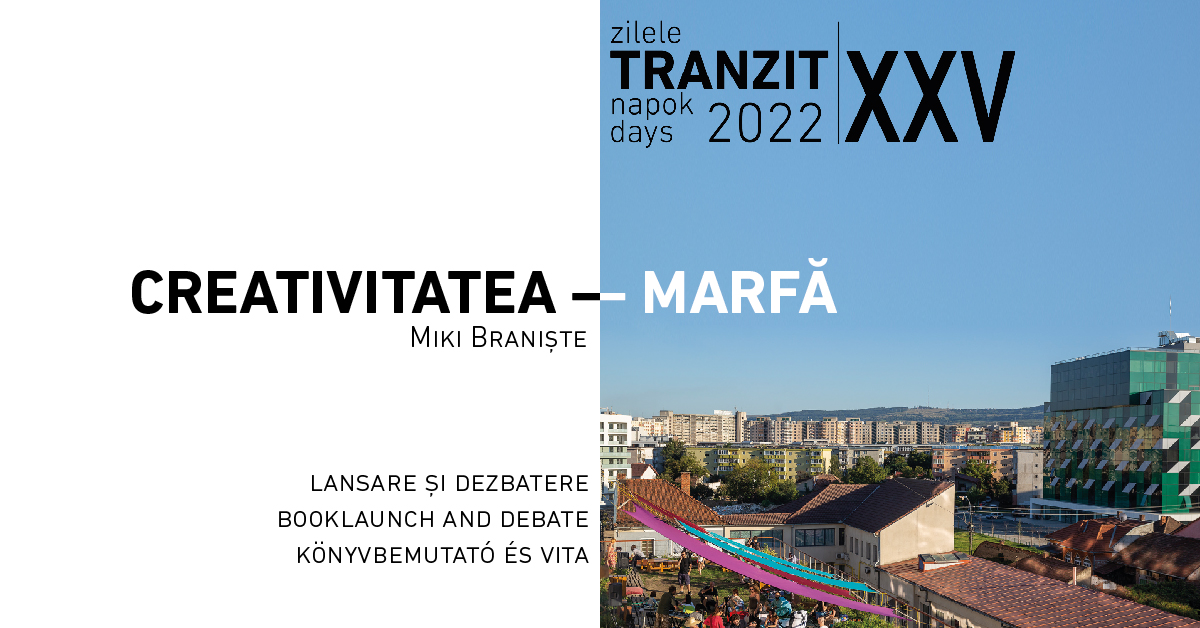